Can the power of prayer stop this carnage?

HAVING survived a 500 kilometre round trip over this holiday weekend to Lake Mburo National Park, mainly thanks to excellent driver Tim, my attention was caught by these driving related stories from today’s papers.

In the Daily Monitor a follow-up story to an accident on Friday night confirmed that 16 people were dead and the driver of the truck involved “fled the scene and his whereabouts are still unknown”. It made just a single column on page 7, but did at least prompt an editorial comment “We must end the road massacres”.

Meanwhile, over in the Jinja district New Vision reports that “thousands of residents joined a campaign to cleanse the Jinja-Iganga highway of accidents”. The campaign took the form of a prayer walk and one of the organisers said they were launching a spiritual war against evil spirits responsible for the accidents.
One prayer walker told the paper: “Road accidents are masterminded by Satan. We cannot attack him using the power of the gun, but by spiritual power through prayer.”
Well, maybe, but I prefer the Monitor’s more pragmatic approach calling for a ban on importing cars more than 10 years old, having a tougher driving test and getting the police to tighten up on enforcing traffic laws. 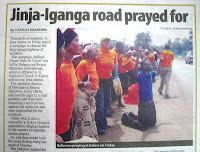 The unholy trinity of poor condition vehicles, awful roads and terrible driving make this a city where staying in is the safest and sensible option. I saw some atrocious driving on the trip across country to the Park and travelling around is clearly a dangerous pursuit.
But, like so much here, there is little individual responsibility for the tragic state of affairs. It’s always a problem for ‘them’, but maybe not when you become one of the victims of the 22,000 accidents a year.
AND IN LATE NEWS…the New Vision website reports plans for an eight-lane highway to Kampala to Jinja. God help us all…
Posted by Alan Geere at Monday, October 29, 2012