“Irreverent, unruly and opinionated”: The lessons Uganda’s media can learn from Lord Leveson

WORKING in Afghanistan just after the fall of the Taliban I called it the ‘Galápagos Islands of Journalism’.

When Charles Darwin visited the remote Pacific islands in 1835 he found the wildlife largely undisturbed by outside influence, and so it was with Afghan journalism. Apart from a bit of help from the invading Russians and some old colonial approaches British the Afghans had just done it their way.
So, it was against this backdrop that I was able to see if all the things I held dear about the theory and practice of journalism made any sense. The lovely people who queued up to be journalists in their newly ‘liberated’ country – mainly poets, sculptors and thinkers from a liberal arts background – enjoyed my robust approach to holding the rich and powerful to account but found it hard to maintain the level of intensity needed to make it all mean something.

Fast forward 10 years and here I am in Uganda trying to make sense of their media landscape, in not altogether dissimilar circumstances. I saw it all writ large yesterday at Makerere University’s Annual Media Convention, where the great and the good tried to make sense of investigative journalism.
Following the informative and  enlightening keynote address – ‘Investigative Journalism: An Adequate Defence of Human Rights and Good Governance’ – by Dr Monica Chibita from Uganda Christian University in Mukono, veteran editor David Sseppuuya (above) came at it with both barrels.
Launching into his topic – ‘Investigative Journalism on the Ugandan Media Landscape: Are We Doing Enough?’ – he derided the “easy pickings” mentality of journalists who simply make the most out of somebody else’s report. “Where is the initiative?” he asked.
He cited a “newsroom culture of indifference” as one of the reasons for a poor recent record of investigations and bemoaned the obstructive impact of big business, who use their clout as major advertisers to restrict journalists nosing about in their affairs.

Counsel for defence, in the shape of senior editorial executives from Daily Monitor (motto: Truth Every Day), New Vision (Uganda’s Leading Daily) and The Observer (Taking You Deeper) burrowed further into the current malaise, referring to poor salaries for journalists and the subsequent corruption in the newsroom as companies and organisations pay for favourable coverage.
Buried away in Lord Leveson’s statement on regulating the British press, released yesterday, he said: “There are truly countless examples of great journalism, great investigations and great campaigns. Not that it is necessary or appropriate for the press always to be pursuing serious stories for it to be working in the public interest.
“Some of its most important functions are to inform, educate and entertain and, when doing so, to be irreverent, unruly and opinionated.”
I’ve spent nearly 40 years being “irreverent, unruly and opinionated” so it’s nice to have his lordship’s blessing. But I can’t help but feel Uganda’s Press might benefit from his words too.
As a student was brave enough to point out to the conference he was “bored” with stories about corruption (see earlier “easy pickings” comment). Me too, and I’ve only been here a few months.

Where are the stories about conservation, the environment, people just doing bad things? Every day I see stories that make me think: What’s going on there?
or


My experience of running newspaper investigations in the UK, US, the Caribbean and, yes, even Afghanistan points to the seeds of success being planted at home with a hungry newsroom of motivated journalists.
And that motivation and inspiration comes in many forms, not just money. And there is nothing more motivating than seeing your publication make a difference.
Posted by Alan Geere at Friday, November 30, 2012 8 comments:

Why these stunning pictures deserve to be seen on the page, not just at an exhibition 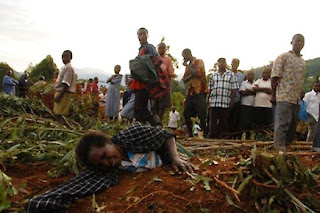 I AM A huge champion of photographers, photography and ‘visual journalism’, to use the buzz phrase, as some of my earlier blog posts show.
So it was a thrill to be at the Uganda Press Photo Awards last night to see all the wonderful pictures on display, including the winning entry by Daniel Edyego (above), and also take part in a panel discussion on ‘photojournalism and democracy’.
My fellow panelists were the great and the good of East African photojournalism, passionate about their art and true to the traditions of journalism at the cutting edge of both history and democracy.
But, as I made clear during my opportunities to speak, what a shame that very few of these quality images are ever published. The daily papers are full of people shaking hands, people standing in lines and groups of people standing around someone important.
The news and features images that everyone spoke so warmly and eloquently about – “capturing a moment in time” said awards judge Carl De Souza – and admired at the exhibition just don’t make it onto the page.
The reasons and explanations are many and varied, including:
There was also some discussion about lack of both equipment and expertise, something I’m here in Uganda to try and change.  At Victoria University we are setting up a professional standard studio newsroom to produce a truly multi-media output of print, broadcast and online.

I will be holding workshops for media professionals and taster days for enthusiasts as well as making our facilities available to people who want to develop their own projects.
We will also set up an online platform where photojournalists – no, let’s just make that anyone – can upload their work to a wider audience.
I have worked with some wonderful photographers around the world and would dearly love to get my hands on the work of some of these guys.
Uganda and Ugandan photographers deserve a better showcase for their work and I hope to help provide it.
Posted by Alan Geere at Friday, November 09, 2012 7 comments:

AND SO to the Kampala Serena hotel (where else is there? daaaahling) for the Marketers' Night Out.


I was one of just a handful of muzungu (loosely translated as foreigners) in a crowd of 350, a testament to the vibrant home-grown media and marketing landscape here as opposed to the ex-pat dominated NGOs and international corporations.
The afro-jazz band was good - take it away Milégé - the African buffet delicious and Mitch Egwang is as good an MC you'll find this side of the equator. The big hall thrummed with expectation and buzzed with chat, both business and pleasure, from a crowd who had clearly had a lot of practice at enjoying themselves.
And the main act didn't disappoint either. 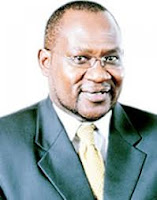 Wachira Waruru (right) is the managing director of Royal Media Services and his Citizen TV brand is now the fastest growing TV station in . He told the crowd how they had "rebelled against the status quo" and defined a new style of TV output that answered the question: "What shall we watch together as a family?"
Mr Waruru explained that an East African audience can't identify with imported shows like Boston Legal and 24. That's a bit harsh on Denny Crane and Jack Bauer but it's easy to see his point
I haven't seen Citizen TV, so I can't vouch for its appeal and as I'm not the target market anyway my opinion is not particularly valid.
But from what I've seen - and hands up here as I haven't been in Uganda that long - African TV veers from a stitch-up of imported shows to home-produced output with low production values and unambitious content.
Mr Waruru admitted that commissioning programmes didn't work and everything is now produced in-house. This issue of 'sustainability of local content' is one that has dogged TV companies the world over and it was refreshing to see such honesty in appreciating that producing TV for the citizens doesn't have to mean TV by the citizens.
I'm already loving the lively media scene here. What I appreciate most is there's lots of it via newspapers, radio, TV and online. Quality may be a bit variable, but the quantity of offerings is a great place to start.


Royal Media say they are looking to bring Citizen TV to . I'm already looking forward to it, if I'm allowed to watch....