Psst! Wanna be a journalist? The Apprentice meets X Factor 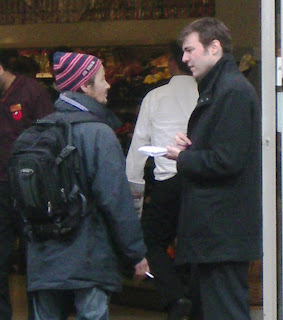 DODGING the traffic across London’s busy Victoria Street, determined not to miss his deadline another hopeful young journalist is eager to show he’s got what it takes to make it as a newspaper reporter.
He’s got half a decent story but his editor (me, also in the street) wants more. So back he goes (see above) and another exclusive, we-didn’t-know-that-before story is identified, researched and written all in less than an hour.
Welcome to The Apprentice meets X Factor as we take to the road to find today’s stars of tomorrow. Yes, there is an over-supply of qualified people and an ad for trainees will bring in hundreds of mad, sad and desperate applications.
So here at Northcliffe South East, sitting on our 45 weekly titles from the badlands of Thanet through the uplands of Sevenoaks and Dorking and back to the badlands of Croydon, we cut out the middle man and try to snare the best recruits before they’ve even finished their NCTJ accredited course.
I give them a quick heads-up with a romp through ‘How Not to Get a Job in Journalism’ – a You’ve Been Framed of the stupid mistakes made when trying to get a job – and then invite the keenest back to show what they’re made of.
It’s a simple enough assignment. Find a story for a specially devised publication and write it up. In that hour I can see if the ‘driven, ambitious and motivated’ applicant on the CV can actually talk to people, find an angle, write an intro that makes sense, construct a sentence and make a deadline. And you’d be surprised how many can’t...
With my sidekick Deanne Blaylock, editor of the Surrey Mirror Series and a perfect Margaret/Karren to my Sir Alan, we tease out the how, the why and the where of the stories and work out whether these people have got any chance in journalism.
Key for me, though, is the ability to engage with people. All the doom-mongers for journalism in general and newspapers in particular seem to have forgotten that finding people and getting them to talk to you is at the heart of it.
Further prophets of doom, like Nick Davies of Flat Earth fame who believes all journalists do is swallow PR guff, should come out with us some time and see the journalists of tomorrow find and write innovative, exclusive stories that are engaging and informative.
Earlier in the week I’d been walking with dinosaurs at the Society of Editors annual conference in Glasgow. A largely uninspiring selection of self-important big-wigs trooped on stage to tell it like it was/is/will be, few of them displaying any of the verve, excitement and ability to have a go that marks out the real leaders in journalism.
Then, Derek Tucker, outgoing editor of Aberdeen’s Press and Journal newspaper, and one of the many enthusiastic and knowledgeable editors I’ve had the privilege of working with weighed in with a heartfelt valedictory address.
“It frustrates me – and I know many other editors feel the same – that a lot of the young people leaving so-called university journalism degree courses are totally not suited for coming into newspapers. Very few possess the street cunning and inquisitiveness that is the hallmark of good journalists and it often appears that English is a second language.”
Tucker, who next year is set to retire after 18 years in the hot seat, told the conference newspapers were “reaping what we began to sow years ago” after deciding it was cheaper and more convenient to let academics train journalists on their behalf.
“Unfortunately though we also washed our hands of the careful selection process which places the attributes of a good journalist above or at least equal to educational qualifications,” he said.
“Tomorrow’s journalists must be identified and trained by today’s journalists not yesterday’s enthusiastic amateurs,” he added.
“Here, here,” say the cowardly blog commenters who haven’t even got the balls to use their names let alone do anything about the problem they perceive.
The trainees I see are trained to the highest standard by people who know and care. I don’t have the capacity or capability to teach shorthand to 100 wpm in 16 weeks or give a thorough grounding in media law or public affairs. I’ll leave that to the experts, thanks, Derek.
What I can offer, though, is a step on the first rung of a ladder that has taken the likes of Derek and me into a rewarding, unpredictable, at times frustrating yet always fascinating career. And I want to do my bit to keep that flame alive.
• This week I will be in Newcastle and Brighton talking to trainees. If you think you’ve got what it takes to work with us just get in touch alan.geere@essexchronicle.co.uk