Move along please, nothing happening here

HERO cop Stewart Gason prevented a terrifying pile-up when he jumped aboard a runaway lorry and stopped it after its driver suffered a stroke.
Wow, what a story! You may have read this terrific tale in your Sunday newspaper – and all this drama happening right here on the A12 near Chelmsford.
And quite rightly you turn to your reliable local weekly newspaper for more detail. Perhaps an interview with the ‘hero cop’ or even a talk with the driver if he’d recovered enough.
And we were ready to do just that until Essex Police sent out a ‘correction’. In one swift sentence – repeated here in all its police-speak glory – we moved from:
Sgt Stewart Gason alighted from the police car and ran alongside the moving lorry, jumped into the cab and managed to apply the brakes just prior to the dual carriageway.
to
Sgt Stewart Gason alighted from the police car and ran alongside the moving lorry and attracted the lorry driver’s attention by shouting at him to stop and throw his keys out. The lorry driver, though unwell, responded to this and stopped just prior to the dial carriageway.
So, what happened, we asked? Could the ‘hero cop’ explain to us how he first ‘jumped into the cab’ but then just ‘shouted at him to stop’. Sgt Gason is too shy to talk, came the official reply from the Essex Police media machine. Could you tell us anything about the driver? No.
So there we have it. An unexplained mystery. Had we got a reasonable explanation you wouldn’t even be reading this now. But we’re not prepared to let you think that we hadn’t bothered to get the full story and that we just settled for the prescription story doled out by the media managers that so many of our less-inquisitive colleagues in the media settle for.
Who knows, by next week, we may even have the full story. Watch this space…
Taken from The Essex Chronicle Says August 13
Posted by Alan Geere at Thursday, August 13, 2009 2 comments: 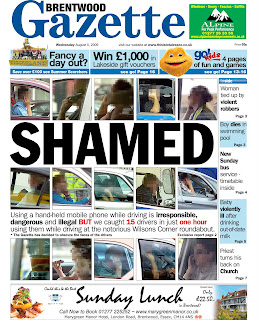 LIKE MOST good ideas the notion to taking pictures of people using mobile phones while driving – which, of course, they shouldn’t oughta – and publishing them in the paper is ridiculously simple.
What comes next seems ridiculously complicated.
Our ever-industrious Gazette news team came up with their own cure for the summertime blues and set up a photographer at a notorious roundabout in the middle of town. In just an hour he snapped 15 people in cars and vans clearly using their phones. Job done.
A simple yet elegant design complete with as few words of possible to explain what’s what and we’re ready to roll (click on the image, right, to see it in more detail). Well, not quite.
Mr Lawyer has his say. We’re OK to run the pictures but must be prepared for all the people featured to come back at us with a defamation claim.
“I wasn’t talking on the phone; I was just holding it.”
“I wasn’t driving; I was parked.”
“It was an emergency.”
“I’ve lost my job and it’s all your fault.”
“Right-thinking people are shunning and avoiding me.” (Mr McNae)
And if we did end up in front of m’lud the photographer would have to stand up and be counted. He’d have to attest that it is a genuine photograph taken when and where we said it was. For a variety of reasons, not least that aforementioned man who’d lost his job has now lost his home and family and is coming after you, we decided that probably wasn’t fair.
Determined not to lose what we’d done we switched to Plan B, pixilated the faces, published and now sit back waiting to be damned.
The paper is on the streets tomorrow (Weds) and we can’t double guess readers’ reaction. Will they thank us for exposing the ongoing flouting of the law in such a dangerous way? Or will they feel we’ve unfairly targeted family and friends who were just doing something that everybody does?
I simply don’t know. And I’m not even sure I made the right call with pixilating the faces.
What I do know is that we’re doing it all again in four weeks time to see if the good people of Brentwood have learned their lesson.
And to make sure we can publish properly and be damned I’ll even take the pictures myself, Your Honour.
Posted by Alan Geere at Tuesday, August 04, 2009 2 comments: