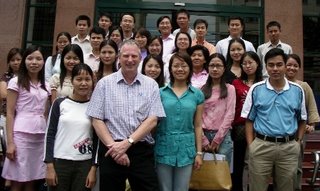 And so to Vietnam where I learn that dairy farmers worried about foot and mouth disease are turning to tortoise production (yes, for food) and am relieved that they know at least one more Englishman apart from Prince Charles and David Beckham.
Whether Gary Glitter is someone we’d all like as a symbol of Britishness in this far-flung country is another debate.
I’m here in Hanoi to run a four-day media management course (see picture above) and am rewarded with a handsome turnout of newspaper editors, trade magazine reporters and a delegation of people from a series of publications for ‘the youth’ – a phrase that always makes me shudder that Look and Learn is about to rise from the grave.
I shouldn’t have worried, though. One of the publications was a natty little handbag sized magazine for teenage girls and in between the advertisement for ringtones and language schools were glossy pin-up pictures, a readers’ forum, fashion and those pesky teenage problems that seem to be same the world over.
It couldn’t have been more different from the traditional daily paper that was selling 400,000 a day – “More than The Guardian” as the cheerful editor was quick to point out – but everyone worked hard together to see if they could take on board some of the latest developments in journalism and publishing.
The technological developments held no horrors for these talented, ambitious young people. Mobile phones are a cultural phenomenon, laptops the must-have accessory and swish cameras the must-to-be-seen-with gadget. My patient explanation of one-man video journalism started to look silly when one delegate showed me just that on his website.
It was therefore easy to forget that this is a one-party communist state operating under the traditional Party lines. But as things drew to a close and delegates reflected on what they might be able to implement back at base many talked about how they would find it difficult, if not impossible, to convince their bosses of what needs to be done.
Not for the first time doing this sort of project I reflected that probably the wrong people were on the course. These bright, lively, funny and ambitious young people only need pointing in the right direction by someone with enthusiasm and experience.
I’d love to think those poor tortoises are going to live for another day rather than the pot. Perhaps that’s not the only futile hope I have…
Posted by Alan Geere at Friday, June 02, 2006 1 comment: