The (other) community news awards

Sadly, like many events this summer, newsawards 2020 was cancelled. The Independent Community News Network (ICNN) Newspaper of the Year, sponsored by Google News Initiative, drew a bumper crop of entries and rather than let them be forgotten ALAN GEERE has devised some special awards just to celebrate these amazing publications. 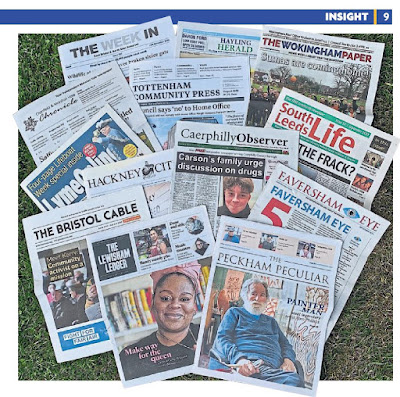 Glenkens Gazette - news from Balmaclellan, Carsphairn, Mossdale, New Galloway and St John’s Town of Dalry. All of that in what some people still call Kirkcudbrightshire, south west Scotland with a population of 3,000. The Gazette prints 1,200 which are all eagerly gobbled up.

Most long-suffering husband and wife publishers…

Kristina and Jeff Nutbeem who founded Sussex Local magazine in 2007. Still going strong - both marriage and magazine – as evidenced by the joint signature on the page three editorial.

... and family most likely to succeed

Father and daughter journalistic team Philip and Francesca Evans who launched LymeOnline, a free fortnightly independent newspaper covering Lyme Regis in Dorset back in January 2018. Judging by the picture bylines, they are both doing well on it.

The Castle Douglas Journal, a local newspaper first published in the 19th century, was relaunched after 170 years. After starting with an initial grant of £3,000 the Journal is now self-sustaining after just three issues, entertaining and informing the people of Dumfries and Galloway.

VIEW, an independent social affairs magazine from Ireland. As editor Brian Pelan says: “In a world where fake news is on the rise, VIEW believes in promoting responsible journalism in a non-sensational manner. We believe in serving our community of readers and helping to tell the stories of the most marginalized groups with in our society.” 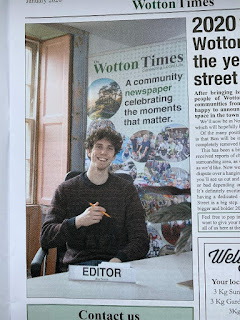 Ben Norris editor of the Wotton Times beaming out of page three behind a sign that says ‘EDITOR Ben Norris’ to illustrate a piece celebrating the opening of their new office.

Biggest community paper – by a mile

Your Local Paper from West Norfolk which clocks in at 102 pages plus a 36-page insert called Your Local Business. It’s a free weekly with a distribution of 24,000, so two sets of numbers any publisher would be proud of.

Faversham Eye, which even has an investigations team who seem to find plenty to investigate – ‘Rugby club shenanigans’ anyone? - in this small Kent town. As the publishers say, “a blend of top-quality investigative reporting and laugh out loud humour has made us hugely popular”.

The Hastings Independent, which has no overall editor in chief. Section editors, aged 17 to over 70, are individually responsible for the content of each section and rotate as sign-off editor.

One household on almost every street on Hayling Island takes a delivery of the Hayling Herald and delivers it to their neighbours in this Hampshire community. Some people take a few hundred copies to deliver to the surrounding roads. The rest of the 11,000 print run goes to community centres, the library, shops, supermarkets, beachside kiosks, cafés and restaurants.

Most out-there names for a newspaper

Goes to the team behind the Peckham Peculiar, the Dulwich Diverter and the Lewisham Ledger which are taking South London by storm.

The Wokingham Paper which has a series of a rolling, paid traineeships for two people every three months in part-time roles. The sports reporter, news reporter, graphic designer and social media manager of all joined the paper in permanent roles after completing the traineeship.

The Waltham Forest Echo which has in the past year looked into fire safety in council owned tower blocks revealing half of them posed a substantial risk, exposed the extent of the local council’s fossil fuel investments and revealed threats to redevelop a much-loved community centre.

Back to basics award

The Caerphilly Observer for their commitment to covering local courts, brought into sharp focus with the story of an amateur dramatics director who was jailed for sharing images of child abuse online. They were the only newspaper to cover this story which shocked readers, as he was a well-known and respected member of the community.

The Hackney Citizen, which this year signed up a gardening columnist as well as an illustrator who produces a monthly comic. They join a long-time food history columnist and all of them bring fresh and interesting ways for the Citizen to interact with and support its readers.

The Cranfield & Marston Vale Chronicle’s tabloid layout was scientifically developed by owner John Guinn after consulting friends and family. One major difference from other local newspapers is the increased font size (aka HUGE) making it far easier to read for the good people of Bedfordshire.

The South Leeds Life offers theatre press tickets on a show-by-show basis. Rather than having just one reviewer they call the program South Leeds Goes To The Playhouse and offer free tickets in return for a written review or conversation with one of the reporters. The scheme, not unsurprisingly, is very popular and tickets are snapped up quickly.

The Week In, from East Bristol and North East Somerset, has had some success selling on stories and photos to other media outlets and agencies. Better than just being ripped off, eh?

The Bristol Cable began in a front room as a collection of bullet points on a piece of A4 paper, sketching out an idea to redefine local journalism. Five years later the Cable prints a quarterly newspaper of 30,000 copies as well as regularly publishing online.

Filtonvoice published its one hundredth issue in January this year. With a mission to bring local news to local people in the town of Filton, near Bristol, the monthly magazine often features stories that are not covered by the big publishers and media outlets. The format has proved so successful other voice partnerships have been set up around the south west.

Alan Geere published his own newspaper – the Long Stratton Community News – from his home in Norfolk while moonlighting from his day job at the Eastern Daily Press in Norwich (he was the night editor so it wasn’t exactly a day job, but you get the idea). It was printed by the formidable Micropress – then in Halesworth, now in Southwold – and still run today by the indomitable Mike Cross. It was a beautiful thing. That one and only issue is now a collector’s piece.