Lovely to see the cut and thrust of comment and debate following the publication online of my chapter in the latest journalism book, What Do We Mean By Local? The Rise, Fall – and Possible Rise Again – of Local Journalism.
As a newspaper editor it’s always tempting to have the last word with those pesky readers, so why change the habits of a lifetime? Here goes with some responses to correspondents on holdthefrontpage and PressGazette

The oil crisis growing on my doorstep 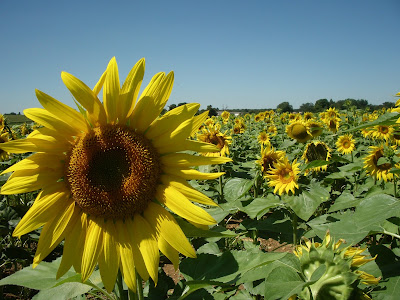 WE ARE right in the middle of sunflower growing season here right in the middle of France.
These titans of the countryside soar to anything upto two metres high in a matter of weeks but show their famous bright yellow nodding heads for just a few days. The flowers and foliage quickly die away leaving the sought-after seeds maturing in the wind and sun.
The French love their Huile De Tournesol – rather like they love everything home-grown – made from the sunflower seeds that most Brits think are just budgie food and Americans chew and spit out at baseball games.
Our region, Poitou-Charente, is the biggest grower of sunflowers in France, producing nearly a quarter of this vast country’s output. And that puts us right in the middle of an oil crisis involving the sunflowers and palm oil, produced mainly in central Africa and south-east Asia.
Palm oil has gathered its critics for both its environmental and health damage and last November the French national assembly's social affairs commission rejected a proposal to triple a special tax on palm oil from EUR100 to EUR300 per tonne.
The so-called 'Nutella amendment' had been initiated by the French Senate and justified on the grounds of promoting healthier eating and combating obesity. Palm oil makes up 20 per cent of the famous chocolate hazelnut spread and Ferrero, the Italian company that makes it, became the focus for anti-Palm protests. And, yes Ambassador, they make Ferrero Rocher too.
For now that legislation has been parked, but the anti-Palm movement is gaining even more support leaving my sunflowers even more important to both France in general and the economy of my little corner in particular.
It’s had the immediate effect of making me forsake Nutella  – a favourite with croissants here – and look more carefully at the ingredients of processed goods.
Not sure it had any effect on the traditional children’s game on making faces out of the heads – haven’t seen that on Xbox yet! – but then again the times do change a little slowly round here…. 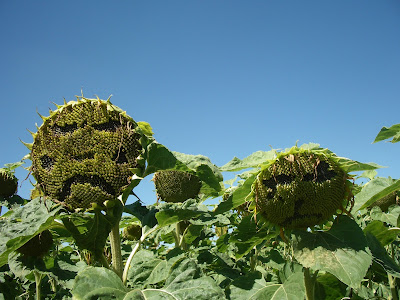