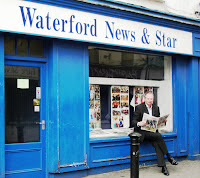 Many of us old lags have been surprised by David Montgomery’s continued sounding of the death knell of the sub-editor.
“There are many humdrum newspaper jobs,” said Montgomery, now executive chairman of European newspaper group Mecom. “The age of the sub-editor is going to disappear – we are coming to the end of the road.”
He went on to tell the House of Lords select committee on communications: “I was a subeditor… but many of those skills have been made redundant. The humdrum tasks are not necessary. We will make every journalist a creative, a publishing star in their own right.”
I was – and still, am – a sub-editor and for a few years under the tutelage of one Montgomery, D., who I can say with a completely straight face was a journalistic genius.
I’ve been putting those skills into practice in the unlikely surroundings of the Waterford News & Star, a delightful weekly paper up against three competitors in the deep south-east of Ireland.
I don’t suppose Mecom would look twice at this outpost of journalism, but Montgomery could do worse than see some of his ideas in action.
There are no sub-editors, as such, at the News & Star. As editor for a couple of weeks my job was to decide what went where, choose the pictures and write the headlines – pretty much the old back bench job on a national newspaper.
Before the copy reached me, the originators – staff reporters, freelancers, PR people, sundry self-publicists who know how to use email – had a stab at a headline and most pictures arrived with a caption of sorts.
Okay, so the grammar might not be great and the niceties of the style book haven’t quite made it into the collective psyche, but the system, as Monty might call it, works.
I don’t know my Lisduggan from my Dungarvan so people who do looked over the pages to make sure the thousands of names and places were spot on, headlines were rewritten and captions tidied up on screen and on proof.
When I made a naïve mistake because I didn’t know what had been going on the resident experts kindly pointed it out. We helped and cajoled each other, and the paper – as papers always do – came out with words and pictures in all then right places.
Bit like it did when Monty was doing it. Plus ça change… as we say in County Waterford.
Posted by Alan Geere at Friday, March 28, 2008 1 comment:

Echo laps it up in Cheltenham special 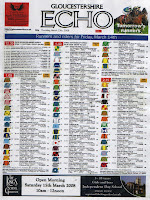 Hats off to the Gloucestershire Echo for rushing out the ‘Runners and riders’ special for the next day, a glossy wraparound with the usual paper inside on sale for just 50p as the punters leave the Cheltenham Festival.
But, hold on, what’s all this inside? Oriental massage…Awesome new girls…lap it up at The Blueroom…Chic & Glossy, I take my Time!
On the inside spread there are seven quarter page ads for what we’ll call adult services plus a house-ad for thisisgloucestershire.co.uk. On the front is a strip (ho, ho) ad for the posh King’s School and on the back a fabric shop.
Now I know we all have to cash in while the sun shines, but this naked attempt at opportunism just seems a bit tacky for an otherwise wholesome and enterprising daily regional newspaper.
We’ve all learned to live with the small ads – the Echo has a column and half on page 44 – but these big, bold, brassy colour ads seem out of place.
Perhaps Gloucestershire Media – aka Northcliffe – has a new anything goes policy. Watch this space…
Posted by Alan Geere at Friday, March 14, 2008 1 comment: