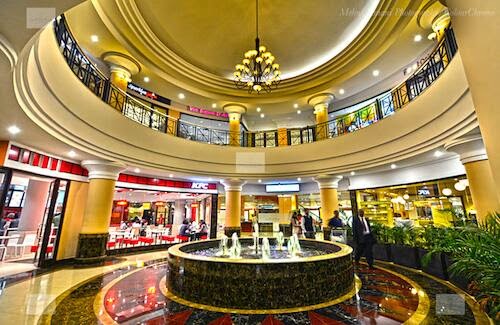 Well, probably not if you are one of the 20,000 people who live in the Katanga slum, just a mile but a lifetime away in the centre of Uganda's capital city.
Here, children play in open sewers, people live in leaky shacks with no water or electricity and those near neighbours of poverty and squalor, abuse and disease, are rife.
By either accident of geography or clever architecture it is impossible to see the horrors of Katanga unless you are actually inside it. From the main road alongside Mulago hospital you look down on a sea of tin roofs, hiding the daily dramas from public view (see below). 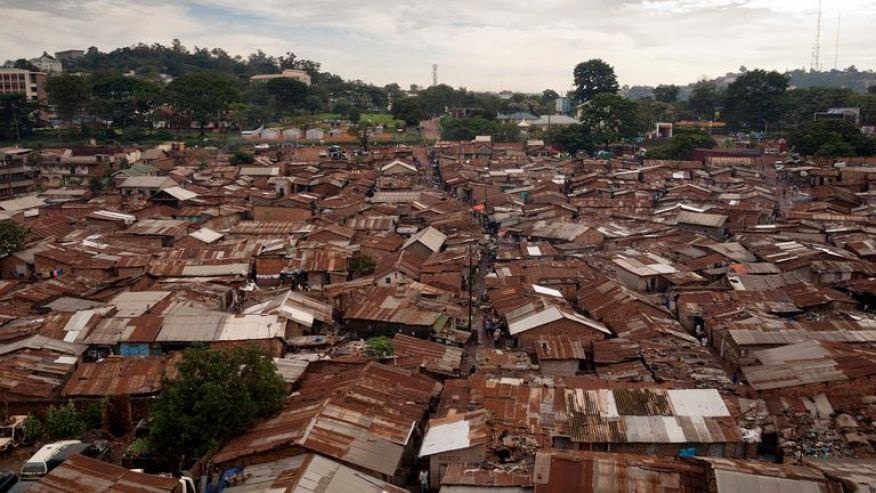 I did go in while my wife was helping out the with the wonderful Kids Club Kampala  -  "Hope and Love for Vulnerable Children"  -  and left with rather a desolate feeling of not enough hope and love to go round.

I don't begrudge Kampala its glitzy mall with boutiques, restaurants, banks, cinema, fitness centre and Apple store. But if just a fraction of the private and public money that goes into these grandiose projects found its way to help some of the less fortunate then death, disease, hunger and horror would start to be consigned to the past.

There is little appetite from locals to help out their countrymen and many of the aid projects are run by foreigners with foreign money. In fact, I was horrified to find out that I knew more about the squalor and deprivation of Katanga than people who had lived nearby all their lives. They are simply not interested.
And as I summon the poolside waiter at the Kabira Country Club (ironically the same name as the super-slum in Nairobi) or sip on a latte while using the wi-fi at the La Patisserie I reflect that it is easy to slip into the comfortable cosmopolitan lifestyle that I can live and many Ugandans aspire to.
I'm not some do-gooder on a mission - Praise the Lord there's enough of them to go round - but am lucky enough to ply my trade as both a media and education professional in what is loosely called the developing world. And I firmly believe we all need to use whatever position or influence we have to persuade, cajole and do whatever we can for the better.
Film-maker Tony Steyger, my friend from Southampton Solent University, has made a powerful report called 'Kenya - The Last Taboo'. The blurb says: In Kenya 6 million people still defecate in the open. This report literally cuts through the crap to take a funny and refreshing look at the serious risks and the bold new tactics being used to tackle them.
For Kenya read Uganda, or indeed one of many locations around the world that still lack basic sanitation.
And all this on a day when the Monitor newspaper reports: US punishes Uganda for anti-gay law: Withdraws support to police, UPDF [Uganda People's Defence Force] and Health
No doubt President Museveni was reflecting on that too as he cut the ribbon this morning.
Posted by Alan Geere at Friday, June 20, 2014 3 comments:

Computers, science, the newsroom and me

“Will the geeks inherit the newsroom?” was one of the many questions posed at the Association for Journalism Education annual conference in Liverpool.
The engaging Angela Long from Dublin Institute of Technology directed us to the Columbia Journalism School which has devised a Dual-Degree Program in Journalism & Computer Science.

Students will earn MA degrees in both Computer Science and Journalism taking in units on ‘Analysis of Algorithms’, ‘3D User Interfaces and Augmented Reality’ and ‘Web-Enhanced Information Management’ along the way.
It’s easy to be a bit sniffy about what road this is taking journalism down, but I’ve always been a bit of a New Romantic and ready to embrace whatever is round the corner – or in Columbia’s case already set up on the High Street.
But within all the app development, data journalism and statistical analysis I hope we don’t forget some of the fundamental lessons of journalism, like the ability to talk to people, get them to say something and deliver that info quickly and succinctly.
The anonymity of email questions and nicking quotes from twitter is all very well but as one of the students before taking a final year assignment asked me rather sheepishly: “Do you mean we’ve actually got to talk to people?”
Other conference highlights: