Ouch! How I was injured on the Tour de France

I AM nursing a sore neck after getting hit by a flying packet of biscuits at the Tour de France.
It’s a dangerous business, this spectator sport. They reckon 15 million people will watch this year’s Tour. Today alone, there were an estimated 300,000 lining the last 15km of the tortuous mountain stage into Mont Ventoux.
No punishing climbs on Friday’s Stage 13 and after about an hour’s gentle pedalling – if you can call riding a bike at nearly 30 mph gentle – the 190 riders swept along the northern bank of l’Indrois river and in less than a minute left Chemillé-sur-Indrois (pop. 227) with nothing but memories and extra work for the commune’s refuse team. 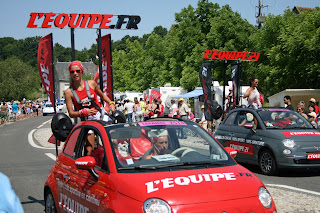 By that time I’d already sustained my injury. Two hours before the race passed through we all gathered for the ‘Caravane’, an indecently commercial cavalcade of sponsors and advertisers in bizarrely adapted vehicles, like a high-class carnival parade.
The convoy trundled through Chemillé (see above) in the biggest invasion since the Romans came to town 2,000 years ago throwing souvenirs to the crowd. Sweets, snacks, newspapers, foam hands, hats, fridge magnets, drinks coolers all caused a mad scramble for athletic local teenage boys and ungainly, middle-aged, overweight Dutch visitors.
And then came the biscuits - I believe they were Les Fourrés Chocolat de Bjorg - in a small plastic pack which caught me just above the left eye. I must have jolted, leaving me with what those pushy lawyers call “a whiplash-style injury”. And when the peloton came through later I narrowly missed a drinks bottle jettisoned by one of the riders (see below). 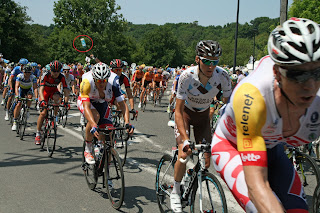 No real harm done, although my two-handed forehand a la Marion Bartoli (gotta support the French on Bastille Day) looks a little weary.
Nothing, though, on Chris Froome who looked like a man on autopilot after winning today’s 242.5km race - the longest stage of the Tour. A sore neck would be the least of his problems…