THERE always seem to be some strange looks when I turn up in the newsroom or classroom to do a session on the 'Soft Skills of Journalism'.
That all sounds rather pompous so I'd rather call it 'Being Nice Gets You a Long Way'. I talk about how to cover death knocks by teaming up with a neighbour or relative before bowling up with your 'We'd like to write a tribute' speech and the importance of making friends with the really important people like security staff, drivers, receptionists and even the tea lady, if there is still such a thing.
The assistant at the care home who will help you gain the confidence of a 100-year-old; the teacher's aide who will let you into the classroom; the Minister's flunkey who will let you get close enough for a walkabout question and the policeman who will tip you the nod past the cordon.
I am reminded of this by a story now running on HTFP that has got the mutterati at it again. 'Weekly reporter files complaint against police over house fire cordon' runs the headline about  Reading Chronicle reporter Courtney Friday, who has done just that.
He set the ball rolling with a couple of tweets: he HTFP story, which spawned a rich variety of comments. Some talk about police heavy-handedness, others about the reporter's naivety or  the part the editor is (or isn't) playing.
I may humbly suggest that filing complaints never gets you very far and it certainly doesn't get you the story. Readers have no interest in the inner working of police-media relations; our job is to get the story out there on their behalf.
Back when I was a boy reporter the common wisdom was that Ernie the Cleaner knew everything that was going on. He was indeed a mine of information from  the comings and goings in the Managing Director's office to when the funeral director was calling with his latest warm death notices.
Sadly Ernie went the way of a lot of 'support staff', replaced by agency workers who swept in and swept out. But the modern days Ernies are still out there; you just got to work hard at finding them. They may even by manning a police cordon near you...
Posted by Alan Geere at Thursday, November 05, 2015 5 comments:

Wake up at the back! Yes, you, the journalist...

I HAD A fun time in Afghanistan working with people who called themselves journalists but were from artistic backgrounds like painting, sculpture and poetry and don't even get me started on American journalists and their 'liberal arts' background.
Like many of today's journalists here in the UK they had no understanding of the financing of publishing or the economics of journalism. Write story/publish/sit back/congratulate self/move on. The readership was a black hole of customers who should think themselves lucky that they are able to read my words.
Beyond the editor (if not at lunch/Rotary/important meeting etc), news editor and a few vociferous local worthies nobody really had a view on whether what you did was good, bad or indifferent.
Now that pesky internet thing has moved the goalposts. A weekly newspaper reporter has gone from:
a) Write a story, wait up to six days for it to be published,  see if phone rings or letter comes in.
to
b) Write a story, wait 30 seconds to see who is reading it, in 10 minutes rewrite/change headline/spike as necessary.
So what's so wrong with journalists being accountable and being measured on what they achieve?


Unprecedented in the industry

Trinity Mirror has done everyone a favour and come out and said it: “Your performance will be assessed regularly, taking into account audience traffic to your stories and therefore encompassing page views, unique users, local audience and other metrics. You will be expected to grow your page views and uniques in line with the growth we require as a business,” says a widely leaked internal memo.
Back comes the NUJ’s Birmingham chapel as reported in Press Gazette with: “On the face of it these targets would be unworkable, counter-productive and unprecedented in the industry."
Yippedeedoo, at long last something "unprecedented in the industry", just what we need to revitalise the dying patient.

Twenty years ago I laboured with some very senior figures at Thomson Regional Newspapers (TRN) to come up with workable productivity targets for journalists and just a few years ago one the great newspaper executives of our time (you may know him: short, Scottish, spectacles) engineered a scheme which actually counted key strokes.
The legions lined up against the TRN scheme ("You can't put a figure on originality", "Genius doesn't count come cheap" or "Doing important background research",) and like a lot of original thinking it foundered for want of buy-in from those - mainly editors - who would need to make it work.
The key stroke scheme was of course bonkers, but I did issue some lazy reporters with the threat that "the system is counting what you do" (it wasn't) with remarkable effect.
Now the sophisticated metrics is doing all that counting, and in real-time too.
As Trinity Mirror Midlands managing director Simon Edgley explains: "The proposals we have shared with colleagues today are quite significant in the change in structure we need to equip ourselves as a flexible, multi-skilled newsroom of the future.
"The decision taken to implement these proposals has not been taken lightly, it is necessary for us to adapt to commercial challenges and provide a structure that gives longer term sustainability of the business."

For too long journalists have thought they are immune from reality. Doing important stuff and getting rewarded from a pot of money that magically appears from somewhere. Not that I blame them. Not enough is done on university courses or within industry accredited qualifications to get new entrants to understand the business of publishing and with it the business of journalism.
And inside the office (if indeed there still is one) the demarcation lines between editorial/advertising/circulation are as obvious as ever so there is little encouragement to find out what those noisy, bell-ringing, over-dressed people are doing.
Mr Media Commentator, Roy Greenslade, put it this way: "The cuts reveal a truth that Trinity Mirror (and other publishers) have previously denied: they are all about private profit and not about public interest."
T'was ever thus, Roy...
Posted by Alan Geere at Wednesday, June 17, 2015 18 comments: 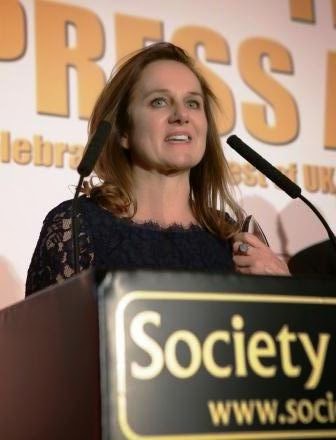