Who wants to be a newspaper tycoon?

The Darlington Despatch, Cranbrook News, Eastleigh Times, Warrington Post, Bishop’s Stortford Independent, Dungannon Herald, The Oxford Paper, Brighton Beezer and Thornbury Voice.
Just some of the newspapers launched in the last year by publishers large and small. Brave? Foolish? Or shrewd business? Probably a bit of all three as ALAN GEERE has been finding out.

HAWICK. Home of the Voice of Rugby, Bill McLaren, luxury knitwear and now one of the most surprising success stories in British newspaper publishing.
The Hawick Paper, funded, launched and edited by former YTS apprentice compositor turned editor Jason Marshall has published every Friday since August 2016 up against his former employer, the Johnston Press owned Hawick News.
Jason, 47, used his redundancy money from JP to fund the project and now has a thriving business with a full-time employee heading up the sales side, regular freelances and expert help with digital and photography.
A print run of 3,600 is spread around 40 outlets in the town and with Morrisons just cracked the hope is that other supermarkets will follow. Surprisingly for a start-up it’s a paid-for at 90p every Friday.
“Reaction from the community has been phenomenal,” reports Jason from a smart coffee shop in town called the Night Safe, which as is the way of High Streets throughout the land is a former bank. “Everything that goes on in the town goes in the paper and readers and advertisers appreciate that.”
Hawick sits at the southern end of a string of Scottish border towns on the A7 between Edinburgh and Carlisle and just 15 miles from the English border. Proud and busy it is the sort of self-contained town that has ‘local newspaper’ written all over it.
That there are two weeklies with ‘Hawick’ in the title, plus the Selkirk-based Southern Reporter and the Scottish dailies on sale in the newsagents make this town of 14,000 an unlikely hotbed of newspaper publishing.
Issue No 83 of The Hawick Paper runs to 40 pages and has everything a local paper used to have. ‘Proper’ news with decent illustrations, two full pages of obituaries, family notices and church services, letters, nostalgia, club notes and eight lovingly produced pages of sport.
Catching the eye are two full pages on the Hawick Amateur Operatic Society’s production of Oliver! Complete with nine photographs and a namecheck for everyone involved from the cast and orchestra through to stage crew and wardrobe.
Also helping boost pagination is a seven-page ad feature called ‘It’s All About Hawick’ showcasing local businesses with an ad and a little write-up.
It’s a thoroughly likeable local newspaper, neatly laid out and true to the over-riding principle that all content should be local.
Jason does confess that the project is “all consuming”. He does the print production himself using InDesign and two days a week he’s at his desk by 5.45am and on Wednesday doesn’t leave until midnight.
And while growth of the paper is limited by the size of the town and its population Jason takes a grown-up view of digital and has a fully-functioning website that has even attracted digital subscriptions. There are 5,500 likes on Facebook and Twitter following is growing.
Just 90 miles south, but a million miles away in attitude and approach, lies Hartlepool where another unlikely start-up is challenging the accepted norms.

"We are deliberately retro"

Hartlepool Life was launched in March 2017 by former Hartlepool Mail news editor Steve Hartley, picture editor Dirk Van Der Werff and newspaper sales manager Paul Healey, along with two local businessmen.
The free weekly, with a 25,000 print run of 32 pages comes out every Wednesday, and pledges to focus on good news about people, businesses and schools in the Hartlepool area. 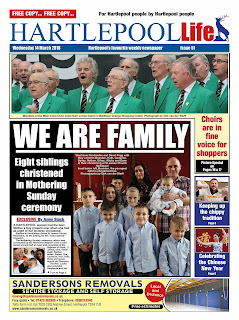 Since its launch in March 2017, Hartlepool Life has taken on 18 people, including journalists, and is now distributed at 200 locations.
Says Dirk: “Our local newspaper had 130 plus years to report bad news, which it still does with abandon. Sadly for them, their readers have abandoned them wholesale over the years – along with the readers of a hundred other regional newspapers.
“We are a free local community newspaper that is doing things different. I am a huge fan of local democracy and holding the council and the police and quangos and other public bodies to account, which we do not do with this newspaper – but we have never said that we won’t hold them to account one day.”
As well as pages packed with names and faces, Hartlepool Life also has two pages of lucrative announcements, surely a testament to the paper’s popularity.
It has a website but no content, just a contact us box, and while it is on both Twitter and Facebook engagement is limited.
“This is totally deliberate, we don't do digital,” Dirk told PJ. “We do in a very small way, but that's just to keep readers in touch with what we are doing – we don't share anyone else's material or retweet stuff.
“We are deliberately retro. We are from an age of newspapers when editorial staff were astonished that managements were giving news stories away for free on the internet - that could only end in disaster, and we were not wrong!
“People have to pick-up their copy of Hartlepool Life to find out what is happening, they don't click on a phone or an iPad.”
And how does Dirk and the launch team reflect on the experience?
“You have to risk everything, sadly, to make a new newspaper work from scratch without a major investor from the beginning,” he says.
“The first three issues we knocked out in the back room of a pub, literally. On Issue 50 we were without broadband for three days in the office and still managed to get the newspaper out on time.
“You have to want success so much and then still have luck and determination to not fail. Looking back, we were more naive in many ways than I would like to admit to. But our vision and friendship and experience in the heyday of local newspapers has seen us to the next stage.”

It’s all very well to have a great idea, enthusiastic and experienced staff and the support of the community – but how are you going to pay for it?
In South London, two entrepreneurs, Kate White and Mark McGinlay, have gone around with the digital hat not just once but three times to fund the launch of The Peckham Peculiar, The Dulwich Diverter and now the Lewisham Ledger.
They devised a Kickstarter crowdfunding campaign to raise £5,000, the minimum amount they needed to cover the costs of the first two issues of the new Lewisham Ledger – including journalism, photography, design, illustration and printing. 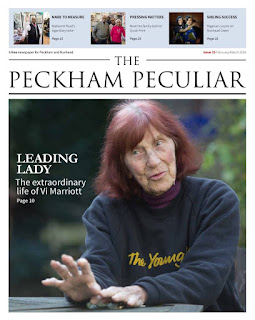 By mid-March they had £6,500 pledged so hope to be able to substantially increase the size of the first two editions.
“We're really happy – and relieved – to have reached our crowdfunding target and to have raised a little bit more than we were hoping for too,” Kate told PJ. “We're very grateful to all the local residents and businesses who have pledged their hard-earned cash to make the paper a reality.
“Now the crowdfunding has finished, we are in the process of commissioning news, features and photography and working on the design of the paper. It's very exciting seeing it all coming to life. We're still aiming to bring the first issue out at the end of May.”
The publishers promise the pages will be filled with “grassroots, on-the-ground reporting and unique stories and interviews” that are 100 per cent about Lewisham and its people, rather than generic content driven by press releases.  “The paper will shine a spotlight on people and places whose stories have never before been told, with a strong focus on design and lots of great photography. It will be stocked by a wide variety of more than 100 local businesses and will be free so the whole of the community can read it.”

Comment on the pledge page from Positive Ageing: “This is EXCELLENT. Much as we are doing everything we can to support older people to get online who want to, we realise how important print media still is for many. Will be in touch in the new year. Whoop.” 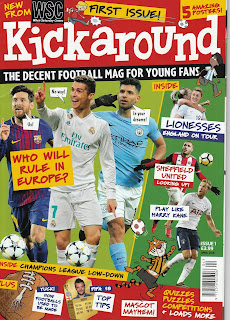 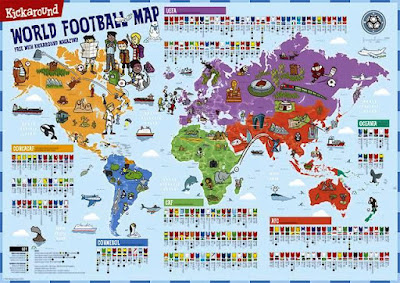