Tony Garnett: Angry old man shows why we must all still care

I’VE SPENT most of my life striving to uncover the truth – or whatever passes for it at the time – and working to relay that to as many people as possible.
So it was fascinating to spend the evening in the company of man who’s spent his career making up stories – and jolly good ones too.
“We make sense of the world and help society to connect by telling stories,” said Tony Garnett, screenwriter, producer and director extraordinaire whose pedigree goes back to Kes and Cathy Come Home through to This Life and Ballykissangel. 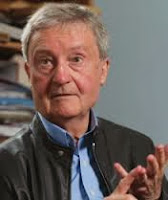 Trim, dapper and looking nothing like his 77 years, Garnett (right) told an audience of students and staff here at Southampton Solent University that documentaries pose difficult ethical problems, which is one reason why he’s stuck to fiction. “There is some seriously morally ambiguous behaviour from film-makers,” he said.
Garnett, himself, has previous in this area. A film he helped make with his collaborator Ken Loach never saw the light of day for 42 years after the charity that commissioned it, Save The Children, took exception to its content.
“We agreed to lock it away in the vault of the British Film Institute if they didn’t sue us,” Garnett told me last night. “But it did eventually get shown once to a small audience all those years later.”
The story behind that film, originally called ‘In Black and White’, but ultimately shown as the nameless ‘Save the Children Film’ is told here, but it would be interesting to see what the protagonists think about it now, especially the big cheeses at London Weekend Television who never did transmit the programme.
It was thrilling to be in the company of such an angry old man –  “You’ll be exploited, abused and pissed on,” he told students at one point – and it was comforting to have such a venerable witness for my prosecution that the creative industries need people who really care.
He had encouraging words for students looking to start a career in screenwriting, citing the number and variety of outlets now available for their work. He shared some of the secrets of his success and touched on his widely-leaked email attacking the BBC for, among other things, “totalitarian micro management”.
But he left with a word of advice that he’s certainly taken heed of himself: “Your reputation is all you’ve got and all you’ll ever have.”
Amen.
Posted by Alan Geere at Tuesday, October 22, 2013 4 comments:

How to make it BIG..and stay a nice guy too

IT TAKES a lot to get 100 students to turn up at 6pm, sit still, stop fiddling with their phones and engage with a forty-something bloke standing at the front of a lecture theatre.
Sadly, pure mathematics rules me out on age grounds, so step forward David Davies, magazine industry guru, college buddy of Jon - The Men Who Stare at Goats - Ronson and now we find out all-round great guy.

Davies (pictured right looking inscrutable!) captivated students at Southampton Solent University with his tale of Brummie Boy Dun Good and sent them home salivating at the thought of a £200,000 job, making a Top 10 single and dining out with the great and the good – and George Michael.
Like a lot of us he’s had his lucky breaks, but you don’t get to be a big cheese at Grazia, heat, FHM and Q without having something going for you.
He was self-effacing to a fault, telling students that he wasn’t the brightest or best but he did share his ‘Six easy tips to build a successful career in the media’.
Among the barrage of superb advice a couple of ideas had the most resonance for me.
I’m guilty as charged on all accounts and just hope our lovely students take it all on board too.

But more than anything I hope they realise that simply being a nice person - engaging, personable, lively and fun - goes a long way too. It certainly hasn't done David Davies any harm.
Posted by Alan Geere at Thursday, October 17, 2013 4 comments: 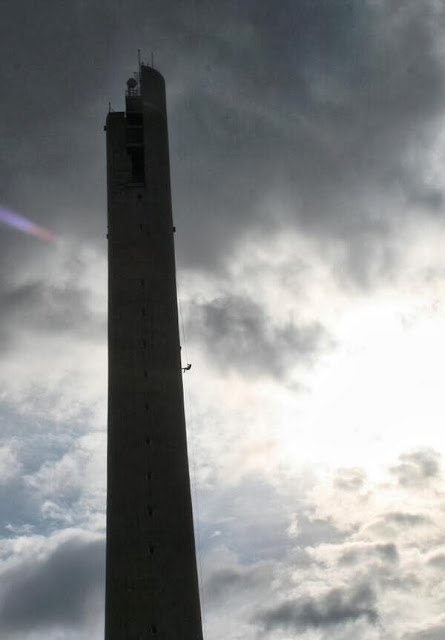 IT GAVE me the willies (can you still say that nowadays?) to look up, let alone down.
Brave souls tackled the 418 foot high National Lift Tower - or 'Northampton Lighthouse' - abseiling down from the access door near the top.
Thousands of pounds have been raised for charity over the past couple of years, but now Scrooge-like residents (not me, I hasten to add, although I live just around the corner) are trying to stop the activity because of traffic congestion.
You wouldn't catch me doing it, I'm afraid, and at £95 a pop I might have other things to do with my money. But if thrills from on high are your thing the National Abseil Centre is the place to go.

And, as they explain on their website: "There is a small risk that if the wind picks up while you are abseiling you could be blown away from the building and hit it on the way back in, possibly resulting in bruising and other injuries."
Oh, that's all right then...
Posted by Alan Geere at Monday, October 14, 2013 2 comments:

'Why I was not born to be a local hack' revisited

THE latest addition to the pantheon of media books is officially launched tonight and I hope my chapter on journalism training gets another airing.
I’m keen to kick-start the debate on what journalism needs to do to not only attract the brightest and best recruits but also retain them.
My research looked at the fate of 60 trainees who I worked with over the past four years and drew some conclusions about where it all starts to unravel for some people.
One suggestion was: “Money is, I feel, is often used as an excuse to get out. Complaining that they are not compensated well enough is a convenient excuse when they are really finding the going too tough or they realise they are not good enough.” 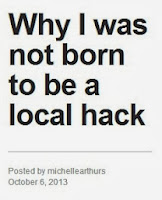 Cue usual outrage from the usual suspects on the usual forums, but just this week one of those trainees who didn’t finish her training has delivered her reasoned, well-written, but also rather sad verdict on the state of life in the trenches in weekly newspapers.
Michelle Arthurs caught our eye when Surrey Mirror editor Deanne Blaylock and I visited the trainees at Brighton Journalist Works. She was bright, articulate, ambitious and just bolshie enough to have the makings of a good reporter.
As Michelle details in her blog post (above)she had a try-out with me at the Essex Chronicle and then joined Deanne on the staff at the Surrey Mirror, first on paid work experience and then as a trainee.

Michelle (left) did well, apart from struggling to make it to 100wpm shorthand, without which she could not be put in for her senior NQJ exams. But eventually she decided that she’d had enough of newspapers and decamped to work in marketing for a cycle shop.
I was sorry to see her go, and wondered what happened to the sparky, motivated wannabe reporter I met in Brighton.
Perhaps her own words sum it up best: “Working as a newspaper journalist was at times exhausting – at times it was stressful. Other days were wonderful, and there were moments when I loved my job. The truth is, however, that I wasn’t comfortable sharing the stories that people didn’t want the readership to have access to.”
I hope chairman Roy Greenslade and the rest of the distinguished panel have a chance to think about those words and what we can all do to make sure the right people come into journalism in the first place when we gather in London tonight.
Posted by Alan Geere at Thursday, October 10, 2013 8 comments: