Masterchef and a masterclass in leadership

WE’RE a lucky bunch, those of us helping media folk with the ticklish issue of leadership.
Forget management – that’s just getting the right people in the right place at the right time doing the right thing – I’m talking about showing, telling, providing guidance, direction, a kick up the wotsit and praise when due.
Because everywhere around us are examples of leadership. Some good (1), some ok (2)and some in need of intensive care. The shift leader at Wetherspoon’s who’s running around keeping both staff and customers happy (1), the train guard keeping us posted with too many announcements (2) and the head receptionist at the doctors who doesn’t seem to know or care that a bunch of sickly ‘customers’ are waiting (3).
Self-important media moguls who turn up for my one of leadership workshops soon find themselves in a supermarket, seeing for themselves how a fast-moving consumer business copes with a myriad of staff and customer issues. And likely as not the manager doesn’t even have an office!
So what a joy it was to see Michelin star chef Paul Ainsworth on Masterchef this week (BBC1), with a masterclass in leadership.


See below how he worked with a new team to provide sparkling service AND a good time for all. 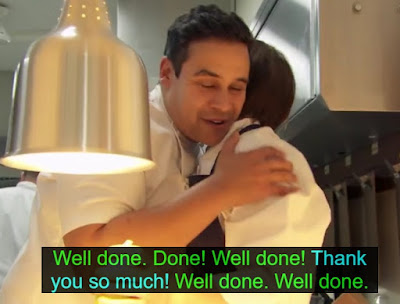 The Next Big Things that journalists in the UK could (should?) be doing

Think you know what’s next for the media? No, me neither, but here’s an insight into some things that are moving and shaking in the USA, traditionally where it all happens first…

WHISPER it, in case any ‘digital engagement officers’ are listening, but UK newspapers have been slow to embrace social media as a newsgathering tool.
Twitter, Facebook and co are too often still seen as the digital equivalent of the green pen letter writer splurging off in the corner without recourse to facts or reason.
The occasional Facebook comment or Twitter post will turn up in a story mixed in with other quotes, but rarely is social media used as the starting point for coverage. But here across the United States, newsrooms are embracing crowdsourcing to ignite their real-time reporting.
The Florida-based Poynter Institute, America’s leading journalism think tank, tracked the use of crowdsourcing in the wake of President Donald Trump’s initial refugee ban in January.
The Los Angeles Times put out a call for people’s reactions to the news. Their collection which ran the same day, shows a collage of fear, joy, anger, respect, sadness and support.
“This is about displaying a diversity of experiences,” said Alexandra Manzano, director of audience engagement, “but it’s also about us building trust and relationships with our readers.
Manzano reports that this approach has become a rich trove for us in terms of finding sources, hearing from more people and representing more people. “We are finding more story leads and also t able to dive deep into the complexity of our country right now.”
At the Dallas Morning News editors saw pictures of travellers detained at Dallas Fort Worth International Airport and the protests in response and quickly built a form asking immigrants in Texas to share their stories.
It felt like a long shot on Saturday night when engagement editor Hannah Wise put the call out on social networks and embedded it onto breaking stories. By Monday, they had almost 50 responses from people from 29 countries. That’s almost 50 people that could be sources on the current news, updates to the immigration policy allowing childhood arrivals to stay in the US and other changes.
She heard back from immigrants from Uzbekistan, Mexico, Germany, Peru, even a former Iraq army translator whose Minnesota-based brother and family were stuck in Iraq because of the ban.
And, in terms of ‘pure news’ they are also people who have not been ‘put up’ by PRs for agencies, charities or advocacy organisations who have become the likeliest go-between for journalists throughout the world today.
poynter.org

A PRINT NEWSPAPER FOR A DIGITAL ERA 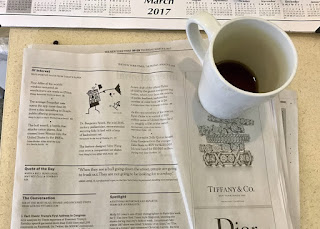 Many efforts have been made over the years to present a ‘quick read’ near the front of the newspaper to hopefully entice readers into the further flung reaches inside. Now the venerable New York Times has thrown open its first two inside pages (A2 and A3) with a redesign “aimed to give readers an overview of what The Times is doing both in print and digitally”.
The paper says it is modelled after the ‘front of the book’ concept of a magazine and will become a place where readers will find interesting, useful and fun information about what The Times is doing not only with its core news report, but throughout the entire organisation. The pages will offer stories and content that has not been part of the print paper before, including a mini-crossword (hats off to i, which is already there) and a “behind-the-scenes look at our journalism”.
“The Times has a universe that extends well beyond the print newspaper, and we’re excited to transform pages A2 and A3 into a must-read destination that gives readers a sense of that,” said executive editor Dean Baquet. “As we continue to invest and innovate in print, this redesign is a step toward creating a print newspaper for a digital era."
nytco.com

There’s some black humour doing the rounds that soon we’ll all be working in ‘Nonprofit News’, but here in the US there are now 120 organisations signed up to the Institute for Nonprofit News, which is committed to improving the skills and durability of the sector.
The Institute, part of the Oklahoma-based charity Ethics and Excellence in Journalism Foundation (EEJF), is launching a new program to support leadership and skills development for future leaders of nonprofit news organizations.
Called ‘The INN Emerging Leaders Council’ it will provide training, professional development and peer support for 10 mid-career individuals in nonprofit news who have demonstrated the potential to become top executives and leaders of the nonprofit news media sector in the U.S.
Nonprofit news organizations have grown rapidly across the US. About 10 percent of INN’s 120 member organizations reported in 2016 that they were in the process of or had recently completed succession planning to name new leaders, often replacing the founding journalists.
As part of its mission, INN works to build the business capacity of journalists founding, leading and inventing new types of nonprofit news media dedicated to the public interest. “Succession is a milestone in ensuring these newsrooms are here for the long haul and can keep serving and informing their communities,” said INN Executive Director & CEO Sue Cross.
While journalism in the UK continues to seek out its place in an increasingly fractured marketplace perhaps an organisation supporting our “news media dedicated to the public interest” wouldn’t be a bad way to go.
inn.org
inasmuchfoundation.org

Over on the thoughtful corner Ben Thompson, the author and founder of independent analyst Stratechery, spells out the effect the onset of the internet has had for all businesses, but the message is loud and clear for publishers.
“Today the fundamental impact of the internet is to make distribution itself a cheap commodity — or in the case of digital content, completely free,” says Thompson. “And that, by extension, is why I have long argued that the Internet Revolution is as momentous as the Industrial Revolution: it is transforming how and where economic value is generated, and thus where power resides.
“In this brave new world, power comes not from production, not from distribution, but from controlling consumption: all markets will be demand-driven; the extent to which they already are is a function of how digitized they have become.”
stratechery.com

TIME FOR ‘THE TEA’

For a media company with such a cutting-edge reputation, the latest wheeze from the Huffington Post to tackle a traditionally tough market has a distinctly old new-tech feel.
To introduce itself to its next generation of readers, the HuffPost is going straight for their inboxes. It has launched The Tea, a weekly newsletter targeted at female Generation Z readers (or, as they were once known, teenage girls), but unlike most newsletters, which just repackage content originally published on other platforms, The Tea’s content — an exclusive interview with a celebrity — will only live in an email. If you want it, you need to subscribe.
“We know that teens haven’t really made decisions about the brands they’re going to allow into their lives in a behavioural way,” said Kiki Von Glinow, Huffington Post’s director of growth and analytics. “This is about introducing them to HuffPost’s brand.”
huffingtonpost.com

Meanwhile, still with ‘young people’, student James Tyner chimes in with a timely reminder that “news in 2017 doesn’t need to follow the production cycle of news in 1987”. As part of a university class looking at how to create new journalism products, he asked fellow students what got in the way of their news consumption.
“For people like us, who didn’t grow up with newspapers and who have used the internet since we were toddlers, a lot of the conventions of news today don’t make sense,” says Tyner. “Adapting a newspaper for the modern web isn’t good enough for people who never read newspapers in the first place. We deserve something new.”
He cites site layout, story length and bias as major issues. “These are problems that erode trust in young people and stop them from engaging with the news. The same young people who will be working, communicating, politically active news consumers for the next half-century or more.”
jamestyner.com

Uploaders to Instagram were granted full access to the runway alongside the traditional fashion photographers at New York Fashion Week. “This is HUGE,” says Emma Klug from fashion blog The Style Note. “What happened to the days when the front rows were filled with pads of paper, pens and photo equipment? Traditionally, photo pits have been reserved for photographers with professional media credentials, and for a good reason. However, naturally, as the popularity of social media has grown, so has the fashion industry’s infatuation with it. Popular Instagrammers with mass followings can offer a lot to brands who are looking to make a mark in the social media landscape.” Whatever next? Instagram photographers only behind the goal at Premier League games or on the royal rota? You read it here first…
Posted by Alan Geere at Monday, May 01, 2017 3 comments: