I tuned in to Desert Island Discs this morning hoping to hear Kirsty Young put actor Martin Shaw through the wringer.
But what a Desert Island washout.
What we got was a passing reference to the street fight that forced him to have plastic surgery on his face, a nod to what is still his most famous role (Ray Doyle in The Professionals) and what seemed like an eternity warbling on about his spiritual conversion to ‘teetotalism, vegetarianism and meditation’.
No insightful questions from Kirsty Young about his three wives, stalker Sandra Price who poured petrol through his partner’s letterbox or why he does that latest TV cop tosh, Inspector George Gently.
Young, a former TV news anchor, follows in the illustrious journalistic footsteps of other DID presenters Sue Lawley (South Wales Echo) and Michael Parkinson (Barnsley Chronicle) but seemed to have left her inquiring mind at the door with this episode.
Hopefully on next week’s show featuring Arlene Phillips (Hot Gossip, Strictly Come Dancing etc etc) she’ll be less of a PR pushover.
Posted by Alan Geere at Sunday, June 21, 2009 2 comments:

At 1.50 on Tuesday afternoon in a room at New Bridge House, the drab offices in Chelmsford that double as coroner’s court, a weary line was drawn under the sad lives of Susan Evans and James Grimwade.
The inquest heard that police broke down the door of their home in Pennine Road, Chelmsford and found their bodies in the ‘unhygienic’ house. They had a history of heavy drinking and the coroner decided they died as result of chronic alcohol abuse.
But hold on a minute.
Two people found dead in the same house at the same time. How often does that happen? At the time of the deaths back in February we asked the police and the social care authorities what they planned to do about investigating the deaths.
We speculated on what might have happened. Suicide pact? Poisoning, either deliberate or accidental? Adulterated drink or drugs? Overcome by fumes from a faulty boiler? Perhaps even murder?
But no investigation was ever forthcoming. The ‘nothing going on here’ signs went up almost from the start and the despite our urgings no-one wanted to do anything.
We had the feeling from the outset that quite simply no-one was interested. But what if two people in their forties had been found dead in a house in, say, Beaulieu Park or Little Baddow? Would the authorities have taken a different view?
We feel that Susan and James have been badly let down, probably in life as well as death, and thrown onto an administrative scrapheap simply because of where and how they lived
We find it highly unlikely that two people would die at exactly the same time in the same place, addled by drink or not. At the very least they deserve a proper multi-agency investigation.
A ten minute hearing in front of a coroner with no witnesses called and no reports ordered is not good enough. Not for Susan and James. Not for anyone.
Taken from this week's Essex Chronicle editorial
Posted by Alan Geere at Wednesday, June 17, 2009 6 comments:

A voice for Tragic Amber

“Thank you for your kind comments. Luke and I cannot believe that our Amber was taken away from us yesterday. Amber’s sister Melody is holding us all together and giving us a reason to carry on. Thank you.”
Jacqui Whyte, Otford

IT IS difficult – no, impossible – to imagine how you could ever recover from your own car accidentally running over your own child.
The story of ‘Tragic Amber’, who was crushed against a post by her mother’s car, happened on the patch of our Sevenoaks Chronicle. Our team has reported the accident sensitively and professionally, not intruding into what is obviously a very private grief.
But then up steps our website, sitting there with all the facts and also with an opportunity to share a comment.
Many readers did, leaving their own tributes on what has become an instant online Book of Condolence. And who leaves the poignant comment reproduced above? None other than the mum at the centre of it all.
This is not the time to start warbling on about how the web is beginning to grow into the complementary medium we all hoped. Let’s just say it’s given a voice to a community in a very troubled time and leave it at that.
Posted by Alan Geere at Monday, June 08, 2009 2 comments:

Elections: My place in history

IT’S election day and we’re all atwitter about our coverage.
Our planning sessions have been all about laptops, mobiles, 3G cards and remote access but the fact remains that it still takes our dedicated team of editors and reporters to make it happen. Have a look later to see how they’ve done.
I got to thinking about my first election as a reporter, covering the count here in Chelmsford when Norman St John-Stevas (now Lord St John of Fawsley) won the seat for the second time in a year in October 1974.
I was excited to be asked by the local agency reporter to help out on the night and had visions of my quotes gobbled up and spat out by the Press Association and turning up in Nationals galore.
And how did I spend the crucial hour or so before the result was announced?
Camped out in the only phone box next to Shire Hall pretending to use the phone so no-one else could phone the result and so bagging us (or, rather, him) the premium paid for getting in first.
Dontcha just love journalism…
Posted by Alan Geere at Thursday, June 04, 2009 2 comments:

Would you run this ad? 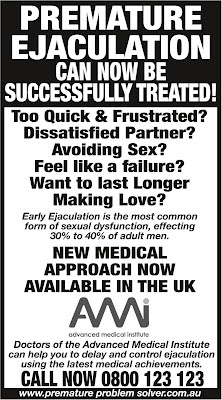 OUR HARD-WORKING advertising people asked if this ad was ok run in some of our titles.
I ummed and ahhed and, after a quick poll in the office decided it was good to go.
It’s not planned to run in the Kent & Sussex Courier, so ‘disgruntled of Tunbridge Wells’ can keep his quill pen dry but there was some disquiet in the equally leafy lanes of Surrey where it was thought some readers might not find it appropriate for a family newspaper.
Anyway, it’s still good to go and is on page 20 of this week’s Leatherhead Advertiser. Are you offended? Did I make the right call? Over to you...
Posted by Alan Geere at Tuesday, June 02, 2009 3 comments:

WE HAD two people come in on work experience today. One had pestered me to get in and by lunchtime had written a page three lead and learned the intimate secrets of the tea rota.
The other went out on police calls with a reporter and upon returning to the office revealed that it “wasn’t for her” after all and duly went home. Even by my shameful standards of brutalising work experience people this was a first: lasting less than 90 minutes.
Moral of the story – pester the editor, and don’t go into journalism with a film studies degree.

AT OPENING time we’re on the trail of the Banjo Brothers – our own little piece of Britain’s Got Talent winners, Diversity.
My initial idea of going out with a video camera and getting the populace to audition on the streets for the dance group was met with the usual polite derision. But we then got lucky when we found out that Banjo junior was sitting his maths GCSE at one of our local schools while the rest of the troupe were being entertained by Gordon at No 10.
Hours later and we’re in for the first (and hopefully, only) interview with Jordan – especially as he talked passionately and eloquently without the help of a PR minder – and some great pix of him, his classmates and even the headmistress.
Yet again I marvel at the ingenuity, dedication and not a little self-made luck that makes local journalism such a fantastic game to be in. Just a shame we’ve got to wait until Wednesday to get it onto the streets.

WE’RE HAPPY to entertain the work placement officer from Mencap and end up taking on a young person with learning difficulties for a couple of hours every week.
What was more shocking was her revelation that she had approached more than 20 local companies with the same request and been shown the door.
I’m no more caring and sharing than the next man, but I was genuinely taken aback. Cue feature on what it means to give someone a chance and some tough questions to those who refused.
Posted by Alan Geere at Monday, June 01, 2009 2 comments:

The tears, the fears, the jeers and the cheers

Apologies for the short intermission, but thanks to popular demand (bless you Steve/Tom) I’m back.
I will be blogging from my vaunted position as editor in chief and editorial director laying bare the tawdry inside workings of a newspaper. Stand by for the tears, the fears, the jeers and the cheers.
Please feel free to comment and make this a ‘conversation’ – just like we’re trying to do our million or so readers across the south east.
Check out my editor’s chair colleagues Keith Perch, editor of the Leicester Mercury and Steve Dyson, editor of the Birmingham Mail to see what they get upto. Perhaps I may learn a thing or two about doing it properly…
Posted by Alan Geere at Monday, June 01, 2009 2 comments: