Why Murdoch is getting sniffy 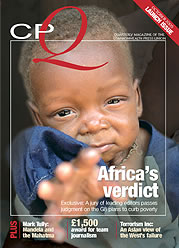 When Rupert Murdoch starts to sniff, either with emotion or because he thinks he’s going down with something, there’s a good chance everyone else is catching a cold.
Twice in the last year the world’s most powerful media owner has shown a softer side by admitting that he’s got it wrong and urged communications companies to wake up to the threats and challenges of the new media age.
Calling the current testing times “the dawn of a golden age of information – an empire of new knowledge” Murdoch told a London audience this month (March 2006) that power is moving away from those who own and manage the media to a new and demanding generation of consumers.
Giving a vote of confidence to robust journalism he said that “never has the flow on information and ideas, of hard news and reasoned comment, been more important.”
The chief executive of News Corporation told the Worshipful Company of Stationers and Newspaper Makers: “The challenge for us in the traditional media is how to engage with this new audience. There is only one way. That is by using our skills to create and distribute dynamic, exciting content.”
The new audience is, of course, that elusive internet generation. People who do not buy traditional media, like newspapers, but rely on information on demand from the web, mobile phones or other forms of electronic delivery.
Just last April Murdoch shocked the industry by revealing that “many of us have been remarkably, unaccountably complacent” about the challenge from internet delivered media. “Certainly, I didn’t do as much as I should have after all the excitement of the late 1990s,” he told the American Society of Newspaper Editors.
He called for a complete transformation of the way we think about the product. “Unfortunately, however, I believe too many editors and reporters are out of touch with our readers. Too often, the question we ask is ‘Do we have the story? rather than “Does anyone want the story?’”
Murdoch put his money where his mouth is last year by splashing out $400m on MySpace.com, a virtual ‘networking’ site where 35 million regular users talk about music, film travel etc and share pictures, videos and their innermost blog thoughts.
But what about the unholy alliance of these newly-enfranchised one-person media outlets with the traditional players? Will there be room for words and pictures generated outside the strictures of the old newsroom culture.
The Daily Telegraph, Britain’s best-selling ‘serious’ daily trumpeted, “a brilliant new way to be part of the paper”.
The gushing copy said: “Have you ever found yourself in the midst of a major news story and wanted to share it with others? Now that so many people have mobile phones with cameras, the possibility exists for us all to contribute to the news agenda.”
Easy as that. Take a snap, send it in, see it on the website or in the paper and everybody’s happy. Well, not quite…
Cue wailing and gnashing from the both the National Union of Journalists and the Chartered Institute of Journalists citing legal and copyright issues plus the perennial protection of “the jobs of professionals in the industry”.
If this predictable po-faced attitude is supposed to put the frighteners on people who want be part of the paper rather than be lectured at then there’s bad news from markets around the world.
The South Korean site Ohmynews – http://english.ohmynews.com/ – has nearly 40,000 citizen reporters on its books who submit content on just about everything with little or no interference from the so-called professional journalists back in the office. Along with this huge workforce of eyes and ears come lots of potential customers too. Last year it turned in a profit of $400,000, two thirds of it from advertising.
Then there is Scoopt, which gives the ‘photographer’ half of the proceeds of pictures they sell and Spy Media, the ‘News Photo Marketplace for Everyone’.
There are plenty of yucky names out there for this. ‘Citizen journalism’ seems flavour of the month along with ‘personal’, ‘individual’, ‘participatory’, or ‘grassroots’ media and even ‘user-generated content’ (UGC), which would no doubt impress the accountants.
The issue has exercised the venerable Poynter Institute based in Miami who worry that the “citizen journalism” label seems to imply that professional journalists are not citizens, rather than what's really meant: “citizens practising amateur journalism”.
But what does all this mean for sales and readership?
Online guru Jeff Jarvis is plain in his assertion that no one owns journalism. “It is not an official act, a certified act, an expert act, a proprietary act. Anyone can do journalism. Everyone does. Some do it better than others of course. But everyone does it” he says.
And like the threat of the internet on classified advertising the whole issue of citizen journalism could soon start to exercise the major media players. The parallels are clear. Just as Trinity Mirror and the Daily Mail have spent millions buying up internet advertising sites soon they may look towards consolidating content that appears on the web.Then the future does start to look very different for our beleaguered national newspapers.
Posted by Alan Geere at Saturday, March 25, 2006 1 comment:

The Observer’s Eddie Butler – who is also, of course, the BBC’s Eddie Butler – reveals how nearly an entire XV of former greats lined up to contribute to Wales’s public relations downfall. Gwyn Jones, Rupert ‘don’t ask me why I’m here’ Moon and the ‘lying’ chairman David Pickering might know more about what happens on the pitch than us mere mortals but they haven’t got a clue when it comes to either communicating what they know or getting other people to open up.
It is one short hop from ex-international to PR hanger-on or TV talking-head. Television has always been generous in providing a gracious get-out for fading sports stars, but most of them are woeful.
The BBC’s rugby coverage now resembles Jeff Stelling’s home for retired soccerfolk on Sky Soccer Saturday. Yes, you’re right, Brian, we don’t know what happens in the front row – we’re hoping you’re going to tell us. Thanks, Austin, we can see also see a man with a bandage on his head – but is it serious?
There’s a grand tradition of Welsh sportsmen – think Cliff Morgan, Wilf Wooller and Tony Lewis – playing a greater part in a wider world. This current lot either need to go back to school and learn some new tricks for their new trade or go back to reliving their past glories in private.
Alan Geere
Sport and The Media Research Unit
University of Westminster
Posted by Alan Geere at Sunday, March 05, 2006 2 comments: