Why all roads lead to Gloucester Services on the M5

Third generation dairy farmer Jess Vaughan is up at 5.30 milking her herd of 80 'ladies' at her Severn Valley farm. By 10am her organic milk is on sale - at a motorway services on the M5. How did the farm shop concept take hold in such an unlikely setting and what are the benefits for traditionally deprived areas of Gloucestershire?

OUT of work and not sure what direction to take, Mark Gale signed up for one of the Government’s latest job creation schemes.
Little did he think that 40 years later, after a lifetime helping people in challenging communities, he would be the driving force behind one of the most unusual and innovative marriages of local interest, rural business and commercial realism.
In the 1990s Gale was a community worker on the Matson estate in Gloucester and struggling to find a worthwhile project to create sustainable change and bring about long term benefit. He took the far-reaching decision to have outsiders conduct an ‘impact assessment’ looking at how the ring of council estates around Robinswood Hill to the south of Gloucester could be re-engaged.
“The communities had lost their way,” recalls Gale, now a youthful 61. “People were no longer using the hill for recreation while jobs and health continued to be a problem.”
That assessment pointed Gale back in the direction of the far-sighted, but improbably complex idea of developing land just a few miles further south for what was then called a ‘Service Station’ on the M5.
Roadchef, one of the big players, had looked at the site back in 1994 so Gale knew there was potential. All he had to do was find partners to stump up the cash and convince farmers to sell the land.

The modern-day motorway knights arrived in the shape of national funding from the Tudor Trust and local money from the Summerfield Trust. Gale talked the farmers into selling by emphasising the benefits to the local community, chaperoned the project through planning and then set about finding the right partner for his vision.
“We wanted to show that local communities can create a significant business, a business that would bring value to producers and customers as well as provide jobs and support for people who needed the help,” says Gale.
Two hundred miles north, at Tebay on the M6, the Westmorland Family business was already doing just that. Their story began in 1972 when John and Barbara Dunning, Cumbrian hill farmers, set up Tebay Services when the M6 cut though their farm. They opened a small 30 seat café serving home cooked, locally sourced food. The Dunnings viewed the M6 not as the death of their farm, but the beginning of a whole new chapter in how they ran the business.
“It really was good timing,” says daughter Sarah Dunning, who is now chairman of a business that has six outlets across the country. “We were thinking about the future and along came Mark with his slightly unorthodox, but very exciting, idea.”
With Gale as the CEO of the Gloucestershire Gateway Trust, a registered charity specifically designed the push through the Services project, and the Westmorland Family on board as the business brains the site opened for business in May 2014 on the northbound side and southbound a year later. 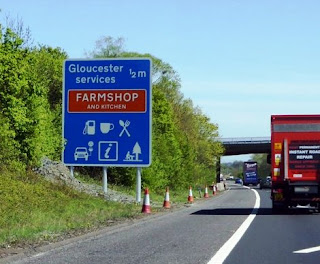 The partnership enables the Trust to benefit from a percentage of sales which go back into the community. But it is not just about charitable donations; it is a more fundamental way of connecting business and community for the benefit of both.
“We both get more out of it than we could generate on our own,” says Gale. “There are 350 staff here, 98 per cent of them from Gloucestershire and 22 per cent from the target communities that kicked off this project.”
With its distinctive ‘eyebrow’ architecture, and a grass roof, it pushes against the norm of the busy-busy, rush-rush feel of many motorway services. There is, for instance, very little signage and absolutely none outside the main building. “We had an advantage building from scratch,” says Dunning. “And we wanted to give a bit of calm. I think that’s what people want when they pull off the motorway.”
And calm they get. Plus enough toilets to accommodate a coach party, freely available showers and even a pond with ducks to contemplate while sipping your ecocoffee. Inside the spacious building 160 local suppliers stock the shelves with everything from meat, cheese and fish through to bread, ice cream and crafts.
The Trust works in partnership with local charities including The Nelson Trust, Play Gloucestershire, GL Communities, Fair Shares Community Time Banks and All Pulling Together Community Association in Stonehouse and Gloucestershire Wildlife Trust.
Last year marked the 10th anniversary of Gloucestershire Gateway Trust and each of the local charity partners received grants directly from Gloucester Services profits. The promise of a guaranteed annual income from Gloucestershire Gateway Trust and Gloucester Services partnership will enable the charities to plan ahead and continue their work.
And what does everyone make of its success? “This site is twice as busy as Tebay and we continue to keep very firm sight of our social objectives and business objectives,” says Dunning. “This was a project many years in the making and it is wonderful to see it up and running doing what it was designed to do.”
And Gale, a former UK Social Entrepreneur of the Year who has pioneered community businesses and business community partnerships, is still seeing clearly. “Everyone who comes on a visit I make them walk up to the top and view the landscape from the Cotswold hills to the Severn Valley with Gloucester in between. There are the people we are really serving. It’s a different way for business and charity to work together but it just works.”
Last word, though, with a family from Manchester who were enjoying the sunshine ‘Welcome Break’ on their way to Devon on holiday. “We just stopped for a break thinking it would be the usual Greggs and Costa,” said dad, between mouthfuls of wild boar sausage roll, “but it is refreshingly different, so we’re staying for a bit.”
They are not the only ones…

From making pies in the farm kitchen to a £2m business

JUST like on one of those TV ‘lifestyle’ shows, Deborah and Neil Flint left behind their jobs in fundraising and IT and started a new adventure on a farm in the furthest reaches of Gloucestershire just a few miles from the Welsh border near St Briavels.
That was seven years ago and having never farmed before, the Flints took a short course before they embraced the rural lifestyle at Cinderhill Farm in the Forest of Dean named after the ash black soil around the farm.
The land had not been a working farm for several years and the couple restored the land to its former use, installing water harvesting systems and other eco measures to sustain the running of the farm. They are dedicated to keeping traditional native breeds including Black Welsh Mountain sheep and British Saddleback pigs.
However, hit by the financial realities of farming, they realised extra income was needed and in February 2013, Deborah began to produce pies in their farm kitchen. Within six weeks, the production unit for pies and sausage rolls was moved out of their domestic kitchen into the ‘Pie House’, one of the outbuildings on the farm.
Word quickly spread about the products and the ‘Pie House’ has since been through two upgrades. The last upgrade took place in 2015 in response to the success of the produce at Gloucester Services.
The range now includes the Original Cinderhill Farm Sausage Roll of Exceeding Enormity (made with real meat joints; low in fat), the Forest Ridgeback wild boar sausage roll and the Foggy (Forest Oggy, where oggy is another term for pasty).
Since providing the services farm shop with their first sausage rolls in May 2014 they have supplied over one million pounds worth of products, around £2m at retail value. In an area of rural poverty they now provide seven full time jobs, some part-timers and enough custom for two jobs at the local butcher.
“Gloucester services has an influence way beyond that which can be easily quantified,” says Deborah, 55. “It offers a stronger future for our community and our county.”
Just a few miles from the services the Vaughan family have been farming at Hardwicke Farm, located at the base of the Severn Valley in view of the Cotswold hills, for three generations.
Jess Vaughan knows the 80 ‘Ladies’ all by name and milks them personally every day to ensure they’re a happy, healthy herd. They do not homogenise their milk, preferring to leave all its nutrients as nature intended.
The fresh milk takes just four hours to reach the services farmshop, delivered alongside yoghurt, cream and a creamy, tangy fermented concoction called Kefir, which might just take off after exposure on The Archers of all places.
“Our herd are all individuals,” explains Jess, 37. “But most are more than happy to have a cuddle and actively seek attention. They are allowed to be who they want to be personality wise.
“The name Jess’s Ladies came from the fact that we were struggling for a name for our own farm bottled milk. Then one afternoon I said I had to go because I had to get back and milk the ladies – and so it was done.”
Cinderhill and Jess’s Ladies are just two of the 130 producers from within 30 miles of the front doors and 70 from further afield.

SERVING IT UP - M5 FACT FILE