Beaten up and left for dead: When the newsman is the news 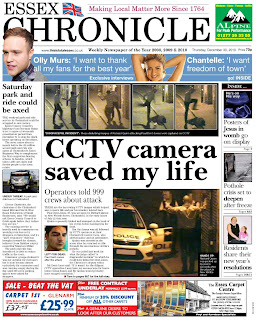 IT'S NEVER easy featuring your own staff in the paper.

If they’ve run a marathon, lost eight stone or jumped out of a plane for charity we’ll probably find a home for them in the back of the book.

But what if they’ve been beaten up in the street and left for dead?

What if they were rescued by sharp-eyed CCTV operators who spotted the assault and alerted the police?

And what if the assailant was jailed for four years for what the judge called a “disgraceful incident”?

My honourable deputy editor, Paul Dent-Jones, had no qualms about what we should do with his own agonising and deeply disturbing story.
Run it on the front page.
We posed the same questions we would if it had been any other innocent bystander, not one of our top journalists:

Yes to all of the above, so page one here we come.
Paul even wrote a poignant first person piece about his harrowing experience and explained to his tearful wife why we had to run it.
He wrote: “Perhaps I could have asked my editor to overlook this story…”
To be honest, if he had, I’m not sure what I would have said.