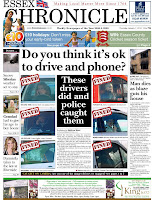 NO SURPRISE, then, that Harriet Harman got off her driving while using a mobile phone charge.
The Labour Party deputy leader was fined £350 today after pleading guilty to driving without due care and attention after she reversed into a parked car in Camberwell, south London, last July. She was on the phone throughout the ‘low speed’ incident Westminster Magistrates Court heard, but the charge was withdrawn.
Not so lucky were the motorists caught in the act by Essex Police and our Essex Chronicle reporter and photographer team. We featured them on this week’s front page along with another pile of people on a spread inside who we nabbed in the act.
Among the bizarre excuses was a woman who said she was on the phone paying another fine she had been given for the same offence.
Our photographer also spotted her car sticker celebrating the anti-establishment anthem Their Law by Prodigy. There’s not much to the lyrics from Braintree’s finest but they do contain the lines I’m the law and you can't beat the law, Fuck ’em and their law. So that’s them told.
Some people see this as low-level anti-social activity rather than anything illegal. We’ve had some stick for “holding friends, neighbours and family up to ridicule”. Tough wotsits, we say, especially when so many accidents – ‘low level’ or otherwise – are caused by this practice.
And, people of Essex, watch out. We plan to repeat the exercise. Don’t call us...
Posted by Alan Geere at Friday, January 08, 2010