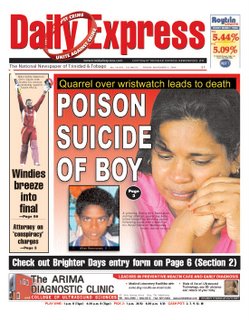 Every editor loves doing the front page. It’s got nothing to do with budgets, staffing issues or defending editorial’s corner in a management meeting (however, as you probably know, I don’t do meetings, so let’s scrub that one). It’s just journalism; what we all came into this game to do.
Some days Page One sort of does itself. There’s an outstanding picture that’s going to leap out of the newsstands and a story that will have everyone chattering in the morning.
Some days – and I confess to probably liking these more – it’s more problematic. The things we’ve been planning all day simply haven’t come off; that great picture I’d drawn on the back of the morning news list just wasn’t there and even those staples that you squint at on a dry day (political bickering, sporting excellence) just don’t cut it.
We had one of those days yesterday.
11am
As I left the office for a couple of hours to do a session with some students at the University of the West Indies we had a tip that an 11-year-old boy had killed himself by drinking poison after being told off at school. Even in this lawless land, where life is cheap, that’s a story. The students asked me what would be on Page One tomorrow and when I related this tale there was a gasp in the room; ok, I thought, that’ll do me.
4.30pm
But come our afternoon news meeting nothing was clear. We had a pick-up picture of the boy and a picture of his grieving mum, but no story and no real idea of the strength of it. Other contenders were a talk with a mother pleading for her son not to be beaten up in prison (see yesterday’s post) and the West Indies getting to the final of the ICC Champions Trophy (that’s cricket, for you Americans out there). I’d been banking on a cricket pic, but they won so easily that it didn’t grab the nation like I’d hoped and picture editor Della pointed out that last time we went with cricket it didn’t go down very well. “I saw papers left on the stand,” she reported. For a paper that sells out every day that’s not good. We decided to hold off for an hour.
5.45pm
So, an hour closer to deadline we’re back having the same discussion, this time with the half a story that the reporter has so far written. Yes, he did drink poison and yes he is dead, as you are when you drink weedkiller lanate. However, he had a row with his brother over wearing a wristwatch and the school angle has faded away. But the reporter is anxious that we don’t go overboard on the suicide angle as it might give other youngsters the idea. News editor Curtis doesn’t think that’s much of an issue and design editor Barry is just itching to get going on the page, so we settle for
POISON
SUICIDE
OF BOY,11
but the bottom line is too long (yes, I know, it’s easy to see now) so we end up with what you see.
8pm
Back home I’m still not very happy about leading with a suicide. People jump under trains (not here, though, because there aren’t any) and fumigate themselves in cars every day and we carefully swerve past their private grief until they turn up at an inquest, where their lives are forensically examined for all to judge.
Carol, sensible as ever, adds more dimensions. Did he really mean to kill himself, or just frighten his family? Did he actually kill himself or was someone else involved? Did he know enough about what lanate can do to you?
3pm next day
A restless night later and now at mid-afternoon I’m feeling a bit better about it. My slap-in-the-face public barometer, our Trinidad Express website, has 50 comments and none of them criticizing our decision to publish. I’ve had no calls from outraged readers. My other man-in-the-street representative, editor-at-large Keith Smith, simply says: “It was never a lead story, happens all the time.”
Ho, hum…today’s another day.
PS: As if to add insult to injury the page didn't print properly either and we ended up with a yucky, low resolution, wobbly page. Aaaggghhh
Posted by Alan Geere at Friday, November 03, 2006